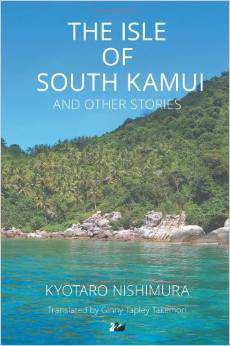 Kyotaro Nishimura (b.1930) is Japan’s bestselling mystery author, especially known for his so-called “JR mysteries” set on Japan’s rail network. He has published over 400 books, ranging from social mysteries to spy novels, parodies, and historical fiction, with sales of over 200 million copies. In this early collection, which features five short stories in settings ranging from the metropolis, a distant southern island and the northernmost tip of Hokkaido, he explores the criminal mind and what makes people do the unthinkable. In the title story, a young Tokyoite doctor accepts a post on a remote island south of Okinawa – at his own admission because of “woman trouble.” Things go from bad to worse as his seasickness is exacerbated by the antics of a drunken salesman, and his irritation mounts in the intense heat as he is faced with the apparent backwardness and savagery of the islanders. When a highly contagious fatal disease breaks out, he has to choose between saving himself or saving others. His situation turns increasingly nightmarish as he finds himself at the mercy of the islanders who follow only the orders of their mountain oracle. In another story at a seaside setting, a hormone-ridden teenage youth left alone with his young stepmother following his father’s death is consumed with jealousy as her affections turn to another man. One particularly poignant tale sees a journalist travel from the metropolis to a bleak shore on the Japan Sea and eventually the furthest extreme of ice-bound Hokkaido in search of answers as he investigates the suicide of a young man. In a backstreet of the metropolis, a wily old detective follows his hunches to nail the murderer of a young prostitute. In the final story, a detective tries to restrain his colleague, who is still haunted by his own personal tragedy, from aggressively pursuing an actress he is convinced has killed her own child. Translator Ginny Tapley Takemori has a BA in Japanese from SOAS (University of London) and MA in Advanced Japanese Studies from the University of Sheffield. She is a co-translator of From the Fatherland, With Love by Ryu Murakami, and her other published translations include works by Meiji-era authors Izumi Kyoka, Koda Rohan, and Okamoto Kido, as well as contemporary authors Hideo Furukawa, Hiroko Minagawa, Hiroe Suga, Sayaka Murata, and others. She translated The Isle of South Kamui and Other Stories as part of the JLPP program.