JATPHARMA asked Tanabe R&D for a brief tour. We were treated to more than three hours of networking, interaction, and learning.

During the first hour, we introduced ourselves and listened to an overview of MTPC and TRDS. Tanabe Pharma, which merged to become MTPC in 2007, was established in 1678 and is Japan’s oldest and the world’s second oldest pharmaceutical company. 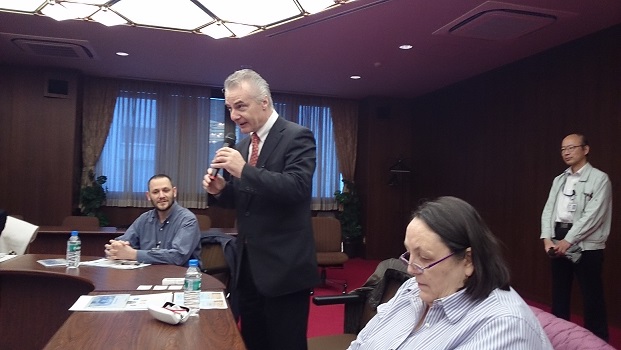 During the second hour, we were shown through the company’s museum, which features Tanabe signage, medicine containers, ads, and awards from eras past. Then we put on lab coats and goggles and toured their labs to view testing equipment we translators normally only read about. I particularly enjoyed watching the spinning paddles in the dissolution testing equipment. 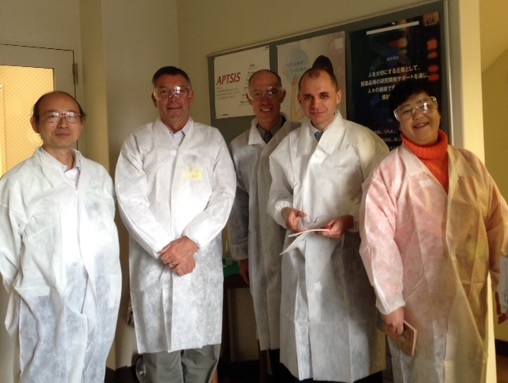 We returned to the room where we began to find bottles of Aspara energy drink waiting to pep us up. As our bodies metabolized the caffeine and taurine, we listened to a talk about pharmacokinetics and testing equipment and then had a Q&A session.

The Pre-IJET-25 JATPHARMA Meeting was held on Saturday November, 2013, at Osaka’s TKP Gate Tower Building, not only a convenient meeting venue, but also notable for the expressway that passes through four levels of the building. Glass-walled elevators climb up the side of the building, giving a panoramic view of Osaka on the way to the designated floor.

JATPHARMA invited Mr. Atsushi Tanase, Corporate Officer and General Manager of the Consulting Division at CMIC Co., Ltd., to speak on the topic “Increasing Globalization of Clinical Trials and the Role of Contract Research Organizations: How Professional Translators Can Meet the Challenges of the Changing Environment" (Slides). 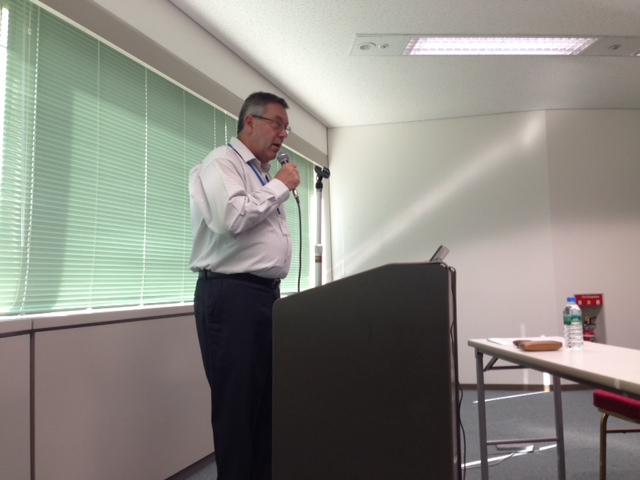 Before a JATPHARMA record audience of 55 that included pharma translators working into and out of Japanese, and coming from as far as away as Fukuoka and Kanto, Mr. Tanase began with an examination of how the Japanese pharma industry fits into the current government’s revitalization strategy, which proposes the development of a Japanese-style National Institutes of Health (based on the US model) for funding biomedical research. He then reviewed the traditional model of drug development via full-service pharma companies and showed how the environment is changing with the emergence of Contract Research Organizations (CROs), and provided some fascinating data on the differences between the US and Japan in the contribution of academia to drug development. He rounded out the first part of his presentation with a discussion of issues facing the Japanese pharma industry, including that of the “drug lag”, described the growing trend toward global clinical studies, and outlined the types of documents handled by CROs that require translation and the challenges faced by CROs in sourcing translation work. 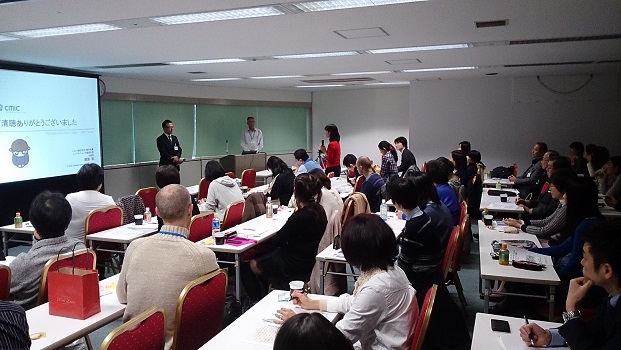 After a lively refreshment and networking session, Mr. Tanase began the second part of his presentation by describing trends in the volume and nature of translation work outsourced by pharma companies to CROs. He then discussed specific quality issues in pharma translation, informed in part by suggestions from staff involved with translation and medical writing at CMIC. He completed this thought-provoking session by describing numerous areas on which pharma translators can focus to meet the demands of CROs such as CMIC.

Mr. Tanase answered several questions, and after applauding him for a thoroughlyprepared and well-presented seminar, the attendees networked again until being chased out of the room by the organizers.

Increasing Globalization of Clinical Trials and the Role of Contract Research Organizations: How Professional Translators Can Meet the Challenges of the Changing Environment